The Rallycheck app is used for registering time controls (TC) and passage controls (PC) during a rally. You will never register a wrong control and all time and speed information is always correct.

Rallycheck is available on the Google Play Store and the Apple App Store.

Rallycheck can be installed on smartphone, tablet or any other “mobile device”.

You can download the app on your smartphone, use “Rallycheck” to search for the app in the store.

The Android app can be downloaded at: https://play.google.com/store/apps/details?id=com.rallycheck

Driving a rally using the Rallycheck app is very simple and intuitive. We recommend the following practice for the best user experience:

Starting the Rallycheck app works like starting any other app on your smartphone.

When you first start the Rallycheck app, you will be asked to register an account (or to login).
See the following illustration:

Select “Register” if you do not already have a Rallycheck account.

After selecting “Register” you will be led to the following screen:

Enter your email address and a password. Make sure to use a valid email address, the Rallycheck system will ask for your validation. This information is also important in order to match your Rallycheck app account to a rally and to calculate a result!

The next step in creating a Rallycheck account is entering (and verifying) your phone number.

Click “Verify phone”.  You will receive a 5 digit code via SMS on the phone number you entered.

You will be sent to the following screen:

The email address which was entered when you created your Rallycheck account will also be verified.

You will receive an email message at the entered address: 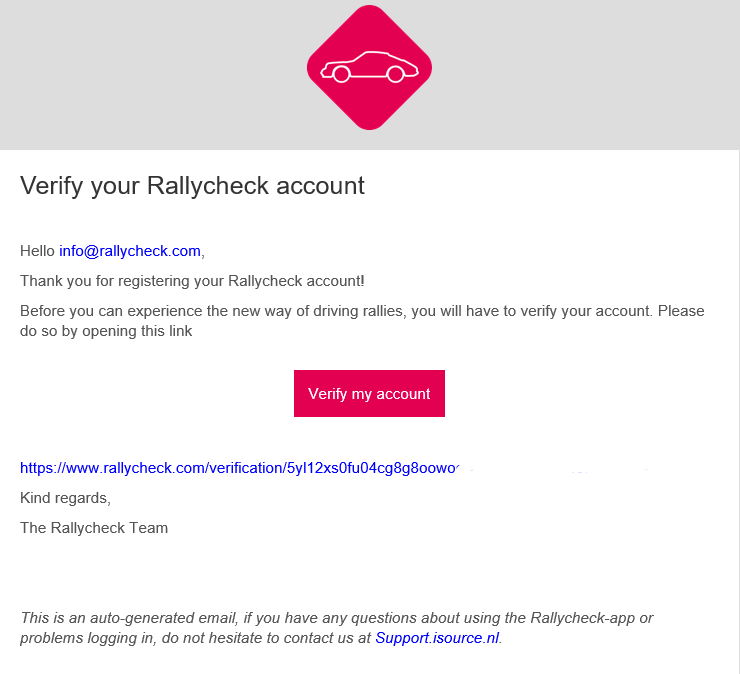 Click on the link in the email message to validate your email address.

Your account will be successfully registered when both steps (email verification and phone validation) have been completed.

The verification process consists of two steps as indicated above.

Verification of your telephone number and email address. This is done to ensure that the information entered is correct and that it is yours.

We have noticed that not everyone succeeds in correctly completing these steps in one go.

We have therefore kept the verification process somewhat “simple” at this time. This has two reasons:

The verification process will be tightened in the future. If your account has not been verified, the app will request verification again.

Until that time you may use the Rallycheck app with limited verification.

When using Rallycheck for the first time, you will be asked to enable use of location services of your phone.

It is extremely important that you ENABLE use of Location Services for the Rallycheck app. If you have not enabled this service, the app will never know where you are! If the app does not know where you are, then you will never encounter a Time Control (TC) or Passage control  (PC). The Rallycheck app only uses your position when active. The app does not track your position when inactive.

With normal use, the Rallycheck app will start with an empty screen. The screen shows a message to tell you to select a rally from the menu at the top left hand corner.

Click on the menu (top left hand corner of the screen)  to expand the menu.

You will see the list of active rallies. Select (for example) “West Friesland – Sportklasse” in order to load this rally.

The rally “West Friesland – Sportklasse” has been selected. You can see the name of the rally in the information bar on the top left side of the screen.
You will see a message for about 5 seconds that informs you that all route controls have been fetched from the Rallycheck server.

The screen is still empty, that’s because you have not yet reached a route control!

If your phone does not have an internet connection when starting the Rallycheck app, it will not be possible to load a rally.  This can be recognized as follows:

The Rallycheck app has a menu at the top left hand corner of the screen. The menu icon consists of three horizontal lines (so called “hamburger menu”).

If you select the menu you can see the following options.

This menu option takes you back to the main screen of the app.

This menu option enables you to select a rally. When selecting a rally, the current card with route controls is NOT deleted.

When choosing this option, you will see a list of available rallies.

This menu option shows the status and settings of the app.

E-Mail verified, if this has a green check mark, the email address has been validated.

Phone verified, if this has a green check mark, you phone number has been verified.

All Waypoints sent, if this has a green check mark, all route controles have been sent to the server.

All RouteLogs sent, if this has a green check mark, all route logs have been sent to the server.

Change Volume, this option, which is only available on iPhone, enables you to set the volume.

Select “Change Volume” from the Settings menu on iPhone. You will see a pop-up option to manage the volume of the Rallycheck app.

Use the slider to set the volume as loud as possible. Classic cars tend to be a bit noisy as compared to modern cars. Setting the volume of the app louder will ensure that you hear a sound when encountering a Control.

Select “Close” to close the pop-up after modifying the volume.

This options is available on iPhone because Apple prohibits apps to set the volume directly. The user is responsible for the volume. On android the Rallycheck app is set to the loudest volume bij the app.

Changing the volume of the sound of the Rallycheck app can also be done by using the volume buttons of your phone, only when you hear the sound. This works on iPhone and Android phones.

This option clears the current route controls on the smartphone. If you are currently driving a rally, the rally will be deactivated. Be careful with this option!

PS. Route controls are saved to the Rallycheck server every three minutes. All sent controls will not be lost for the rally. They are saved at the server, you will however, not be able to see them on your phone.

Using this options logs you out of the Rallycheck app and closes the app.

The next time you start the app, you will be asked to enter your credentials to login.

It is not necessary to logout from the app. You can just close the app, like you do with all other apps. Then the next time you open the app, it will not ask you to login.

6.Driving with the app

When using the app, and entering the proximity of a control,  the passage control or time control will be shown on screen. The app will also sound a chime (three times) so as to attract your attention.

For example: the passage of control RC1.

You are given the opportunity to save this passage control. 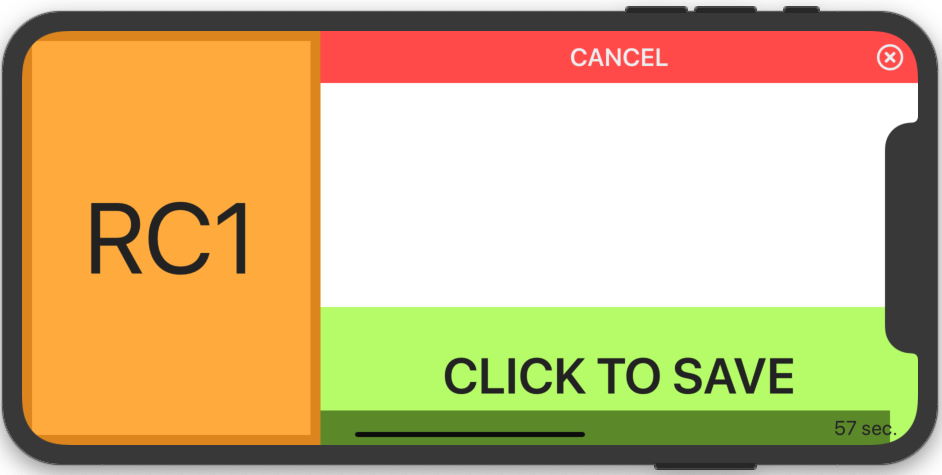 You can also chose “Cancel”. This wil remove the control from the screen without saving it. You do not have to wait 60 seconds.

An organizer can implement mandatory Time or Speed controls. These controls may be placed anywhere on the route.

The Rallycheck app detects the type of control and shows the control on screen. The control is automatically saved. 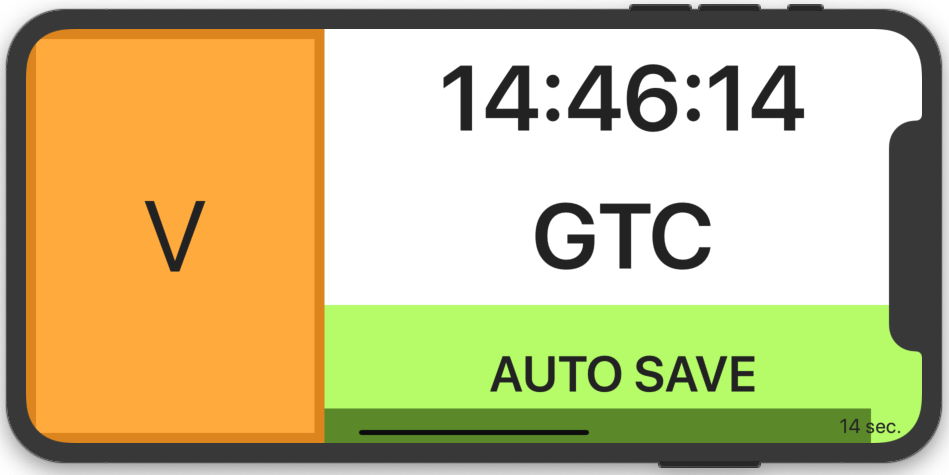 The green button shows “AUTO SAVE”. This means that the route control will be automatically saved. Depending on what the organizer of the rally has configured, the speed and/or the time of passage will be noted on the control card.

The pop up with the control will disappear from the screen after 15 seconds (default). It is not necessary to click on the green button, but this can of course be clicked if the participant wants to.

The following picture shows an example of a time control and a speed control on the control card: 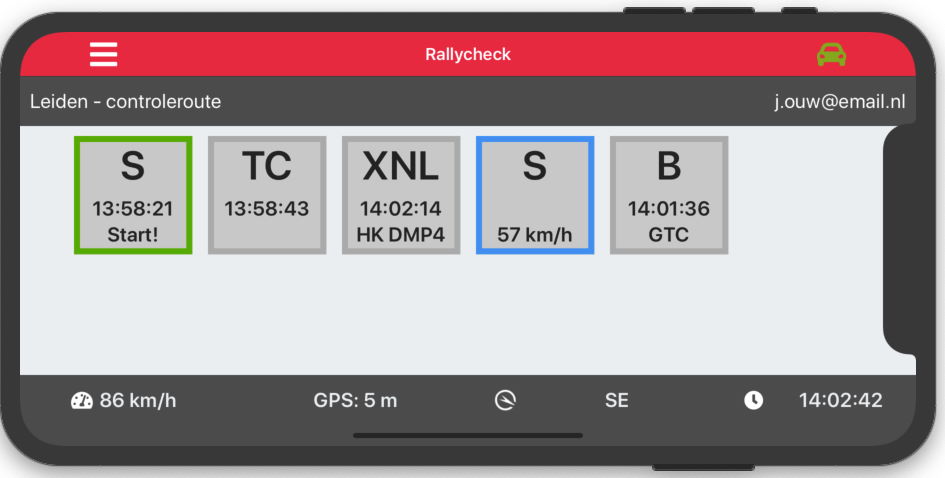 The rallycheck app can show instructions to the participants when passing a route control.

In principle any type of information can be shown. There is of course limited space on the screen, so be careful in using long text information. The following in example shows some information (bold lettering) on screen 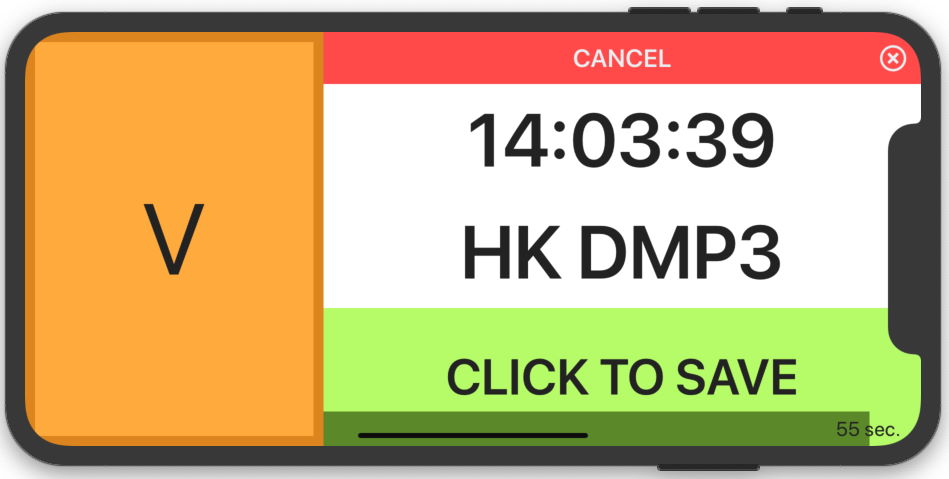 HK EL DMP3 : Turn here, Left at the end of the road, resume route with point 3 (loosely translated from the Dutch language).

The last route control of a rally (or rally stage) is the Finish control. 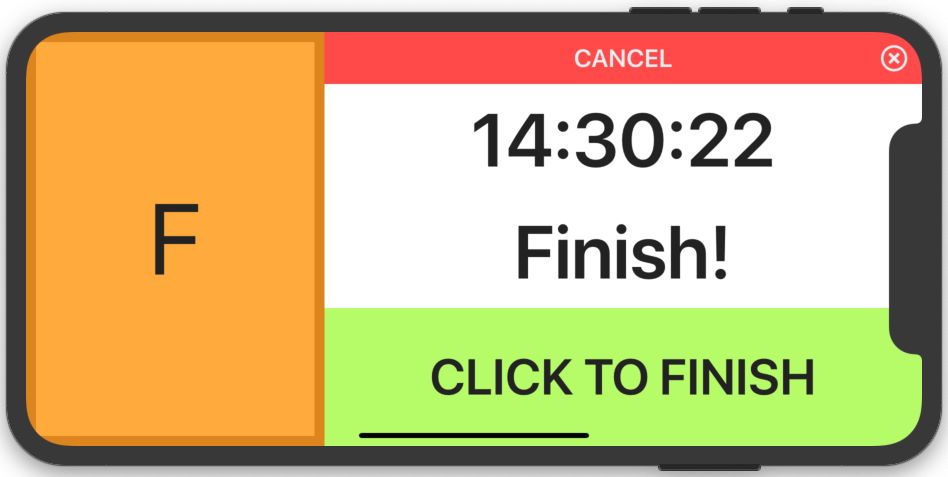 On the screen, next to the route control, you will see the “Finish” text.
Select “CLICK TO SAVE” to finish the rally (stage).  The Save button will stay on screen until you select save (or select the cancel button).

When saving the finish control all rally information (that has not previously been sent to the server) will be sent to the Rallycheck server for processing. You will receive an email with the information on your control card. See the example: 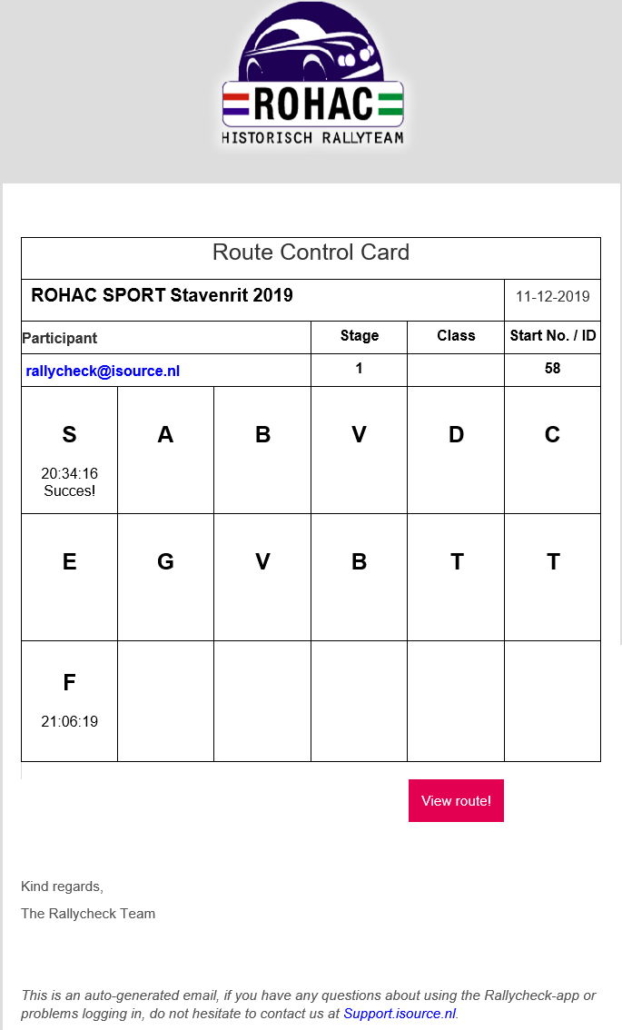 6.4.Information at the bottom of the screen

The bottom information section of the screen in the Rallycheck app contains valuable information that may be used when driving a rally.

The following information is shown:

Rallycheck is a product of isource bv.